Dietary Cause and Control of Insulinoma in Ferrets

When a ferret eats carbs (such as those found in kibble), the glucose (sugar) from the food gets absorbed into the blood stream. This causes a sudden increase, or spike, in blood glucose (BG).

When the ferret’s BG goes up, the Pancreas is stimulated to release Insulin. Insulin causes the fat tissue and muscles to remove (take up) the glucose from the blood in an attempt to bring BG down to a normal level. This causes the blood glucose to drop.

In a healthy kibble-fed ferret, this will cause a series of peaks and troughs in the blood glucose. The insulin levels are higher than in a raw-fed ferret, but not high enough yet to cause dangerously low blood glucose. [A 4-hour fasting BG below 70mg/dL (or 3.88 mmol/L) indicates insulinoma]. You can picture as something this like this:

Diets containing carbs (kibble!) force the pancreas to produce more insulin than it normally would on a species appropriate diet. Constantly producing insulin at greater than normal levels puts a lot of strain on the pancreas. Eventually, this constant strain on the pancreas causes insulinoma to develop. In a ferret with insulinoma, the Beta (β) Cells of the Pancreas (special cells that create insulin and live in clusters called “Islets of Langerhans”), have become diseased. Two main things happen:

This leads to MORE β-Cells which are all secreting MORE insulin than normal, resulting in a dangerous excess of Insulin. As previously mentioned, Insulin causes the tissues (especially the fat and muscle) to “steal” the glucose from the blood.

When you feed kibble to an insulinomic ferret, what happens?

An insulinomic ferret has a lot of insulin being released, causing tissues to “steal” glucose from the blood. When a ferret eats kibble the carbs in the kibble cause a spike in blood glucose. This spike tells the pancreas to release even MORE insulin (in addition to the excessive amount that is already there). Now the glucose is rapidly leaving the blood, causing blood glucose levels to drop into the danger zone. When the insulinoma is uncontrolled and/or the ferret goes too long without eating, the blood glucose plummets and the ferret crashes. Now you can picture something like this:

By ensuring the ferret eats frequent small meals, you can attempt to intercede before the BG gets low enough to cause a crash. However, If you miss a feeding or when the insulinoma becomes too severe to control by diet alone, the ferret will still crash. Picture something like this

So what happens when you feed raw?

When a ferret eats a properly balanced and varied diet of raw meat and/or whole prey, they do not experience the same blood glucose roller coaster that kibble-fed ferrets experience. Raw food digests (absorbs) more quickly than kibble, and proteins and fats are metabolized (used) much more slowly. You also do not have carbs (glucose!!) entering the bloodstream from the digestive tract, eliminating the sudden blood glucose spike after a meal containing carbs. Instead, the fat and protein are used to build muscle, and provide energy.

So how do they have any glucose in their blood? The brain in particular requires glucose to function. Therefore, the liver uses special enzymes to convert some of the protein and fat into the exact amount of glucose the animal needs, without any unnecessary excess. Thus, by eating a diet that does NOT contain carbs, the animal is able to maintain a much more stable blood glucose level! This means the pancreas does not have to endure the strain of constant insulin overproduction, and significantly reduces the risk of insulinoma.

In a healthy raw-fed ferret, you can picture something more like this (the red line is a raw fed ferret, the gray line is for comparison to a kibble fed ferret): 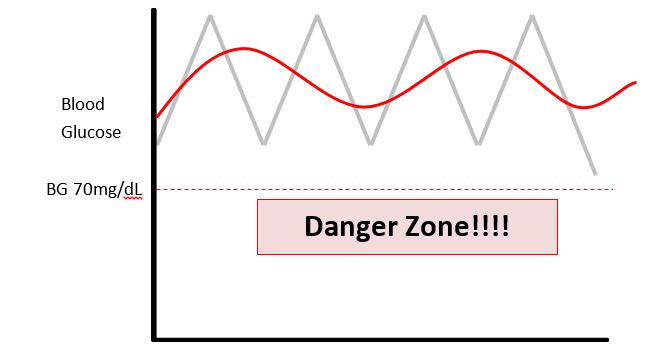 If the ferret has insulinoma however, the pancreas will already be producing unnecessary amounts of insulin. So, while you will not have the same roller coaster of blood glucose levels seen in kibble-fed ferrets, the insulin will still be telling tissues to draw glucose out of the blood, causing an overall lowered blood glucose.

You can picture the blood glucose of a raw-fed ferret with insulinoma as pictured below. If the insulinoma is too advanced to be controlled by diet and/or medication alone or if the ferret goes too long without eating, they can and will crash (dotted arrow). 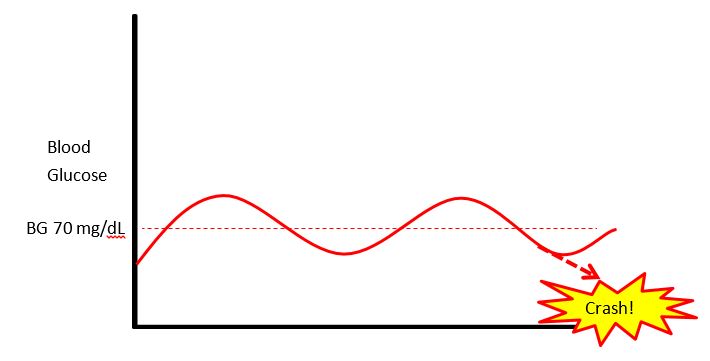 Medications such as Prednisolone and/or Dexamethasone help to raise the blood glucose to more normal levels, once the medication has stabilized, despite the excess insulin production by the pancreas. In some severe cases Diazoxide is also used, which helps to block insulin secretion but may have harsh side effects. Medication, in conjunction with a frequent (every 4-6 hours) meals and a species appropriate diet, will greatly reduce crashes and improve the ferret’s quality of life. However, it unfortunately does not stop the insulin production or the rapid multiplication of beta cells in the pancreas. Medications, frequent meals, and species appropriate diet may prolong your ferret’s life by helping to slow (but not stop) further damage and improving quality of life, but they cannot reverse the damage that has already been done.

In the pictures below, the blue line represents blood glucose in an insulinomic ferret receiving medication AND eating a balanced raw diet. The yellow line represents an insulonomic ferret receiving medication and on a kibble diet. (The red line is for comparison to a non-medicated insulinomic ferret on a raw diet). The glucose peaks in a kibble fed ferret will continue to tell the pancreas to release more insulin and will only serve to accelerate the condition of insulinoma, even on medications.

DISCLAIMER: This article is meant to be a very general summary. Obviously the metabolic and disease processes in insulinomic ferrets are far, far more complex than this article describes. The graphs are NOT accurate (hence the lack of numbered units) but are only meant to give you a visual idea of the general trends of blood glucose under different scenarios.

Kienzle, E. (1994). Blood sugar levels and renal sugar excretion after the intake of high carbohydrate diets in cats. The Journal of Nutrition. 94, 2563S-2567S.